There’s a three-wheeled newcomer on the streets of O’ahu — the Mini Coupe — although it’s actually a two-seater moped.

Mini Coupe Hawaii sales manager Jacob Wankasky said the company started renting the brightly colored little vehicles in February from a fleet of 31 based at the Hawaiian Monarch Hotel on Waikiki’s Niu Street.

He said the company bought the coupes from a previous owner who had purchased them three years ago but needed to get legal approval for the three-wheeled two-seaters. Wankasky said that came through last year. 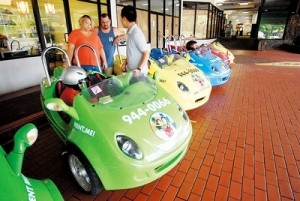 Despite a current downturn in tourism throughout the state, Wankasky said business is picking up a little more each week, especially on sunny summer days.

“We sell out a lot, depending on the weather,” he said. He said most people call to find out more when they see the coupes on the road. The company also rents a space near the Waikiki Beach Marriott Resort & Spa.

Riding in the little convertibles offers an obstructed view of the sights and sounds of the street scene. The motor starts up like a moped, sounds a little like a lawn mower and turns heads among the curious, prompting some people to wave or shout from the sidewalk.

“People feel like celebrities for a day,” Wankasky said.

Jena and Gary Morris of Roanoke, Va., rented two of the coupes Thursday morning to take a half-day trek to Diamond Head, the Kahala Hotel and out toward Hanauma Bay with their sons, 6-year-old Abram and 5-year-old Joshua.

Why the sporty two-seater moped? “I have two boys and that’s what they want to do,” explained Jena before buckling up and heading out.

“No sharp turns, and be gentle with the gas,” Soh suggested. He also walked them through an inspection reminiscent of the rental car routine: look for major scratches, check to see if the gas tank is full, and he warned them that’s there no reverse, so the best way to back up is walking next to the coupe like a bicycle.

Wankasky said people can rent a GPS tour that takes them turn-by-turn to their destination. He said the most common trip is out to East Honolulu, although some take a seven-hour trek to the North Shore and back.

So far, he said the celebrity clients have included musicians Lil’ Wayne and Erykah Badu.

And he said some residents rent the vehicles for weddings and other celebrations. Later this month, one Waikiki hotel has reserved 25 of the coupes for “a manager’s outing.”

Honolulu Police Lt. Cary Okimoto, who has worked in Waikiki since 2003, said he’s heard of no problems with the Mini Coupes. “It’s kind of new to me,” he said. “We haven’t had any complaints.”

Police did say a few of the vehicles have received tickets when renters take them on the freeway, where mopeds and other slow-moving vehicles are banned. And Wankasky says other drivers also will call to report seeing the coupes on the Pali or freeway or anywhere they think they don’t belong.

He said the staff tries to reach the drivers to remind them of where they should and shouldn’t go.

Wankasky would not identify the company’s owner, but state Department of Commerce and Consumer Affairs records show the company was registered Nov. 21, 2008, by agent Jennie Hanaoka.

Each of the coupes now include the company name, phone number and the biblical citation John 3:16. Soh said that’s a reflection of the Christian family owner’s beliefs.

“They feel like it’s a blessing for the opportunity to be here,” Soh said.